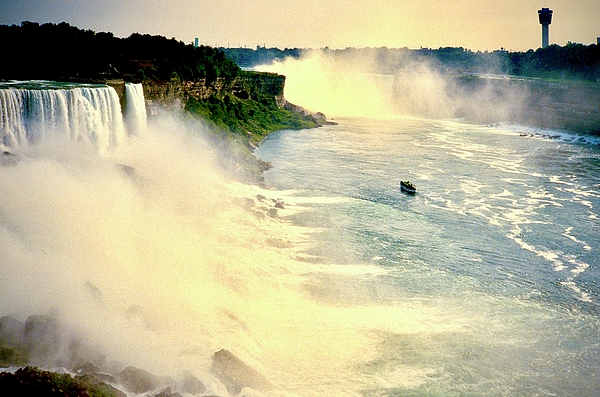 Queen duvet cover (88" x 88") featuring the image "Niagra Falls 1984" by Gordon James. Our soft microfiber duvet covers are hand sewn and include a hidden zipper for easy washing and assembly. Your selected image is printed on the top surface with a soft white surface underneath. All duvet covers are machine washable with cold water and a mild detergent.

Niagara Falls is a group of three waterfalls at the southern end of Niagara Gorge, spanning the border between the province of Ontario in Canada and... more

Niagara Falls is a group of three waterfalls at the southern end of Niagara Gorge, spanning the border between the province of Ontario in Canada and the state of New York in the United States. The largest of the three is Horseshoe Falls, also known as Canadian Falls, which straddles the international border of the two countries.[1] The smaller American Falls and Bridal Veil Falls lie within the United States. Bridal Veil Falls are separated from Horseshoe Falls by Goat Island and from American Falls by Luna Island, with both islands situated in New York. Peak visitor traffic occurs in the summertime, when Niagara Falls are both a daytime and evening attraction. From the Canadian side, floodlights illuminate both sides of the falls for several hours after dark (until midnight). The number of visitors in 2007 was expected to total 20 million, and by 2009 the annual rate was expected to top 28 million tourists. The oldest and best known tourist attraction at Niagara Falls is the Maid of...

I am a photographer who is constantly looking for great images which make people appreciate the world around them. I have spent the last 50+ years taking photographs of a wide range of subjects which I get passionate about. I am constantly looking for great images and I have a vast collection of slide and negative images - of which the best ones I am now scanning and adding to my fine-art-america web site I studied professional photography for 2 years before joining Jessops (the former Photography Retail Giant), where I spent 27 years managing teams of people in stores,warehouse and office environments. All images copyrighted by Gordon James. These images are meant for use as fine art print display. No license is transferred with the...