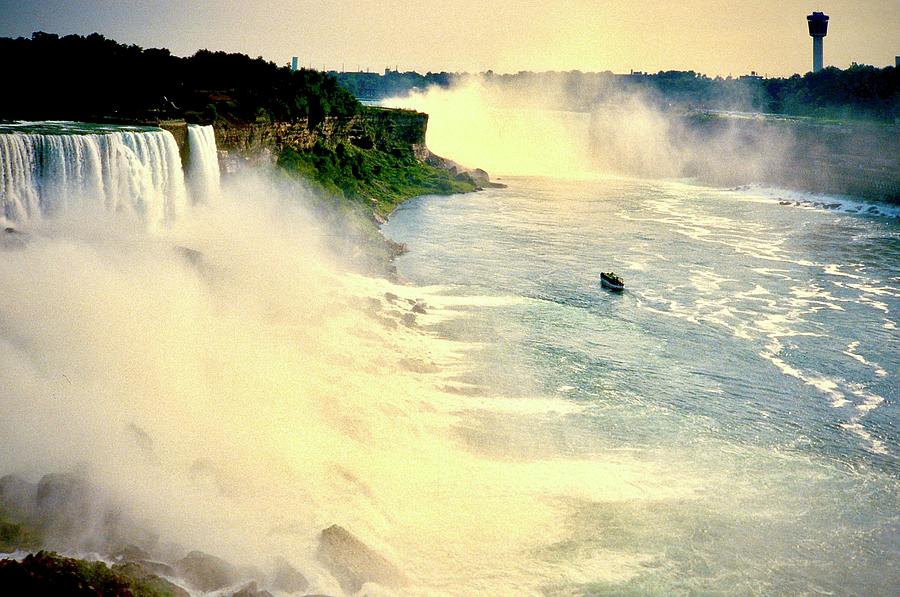 Niagara Falls is a group of three waterfalls at the southern end of Niagara Gorge, spanning the border between the province of Ontario in Canada and the state of New York in the United States. The largest of the three is Horseshoe Falls, also known as Canadian Falls, which straddles the international border of the two countries.[1] The smaller American Falls and Bridal Veil Falls lie within the United States. Bridal Veil Falls are separated from Horseshoe Falls by Goat Island and from American Falls by Luna Island, with both islands situated in New York.
Peak visitor traffic occurs in the summertime, when Niagara Falls are both a daytime and evening attraction. From the Canadian side, floodlights illuminate both sides of the falls for several hours after dark (until midnight). The number of visitors in 2007 was expected to total 20 million, and by 2009 the annual rate was expected to top 28 million tourists.

The oldest and best known tourist attraction at Niagara Falls is the Maid of the Mist boat cruise, named for an ancient Ongiara Indian mythical character, which has carried passengers into the rapids immediately below the falls since 1846. Cruise boats operate from boat docks on both sides of the falls, with the Maid of the Mist operating from the American side and Hornblower Cruises(originally Maid of the Mist until from the Canadian side.)
From the U.S. side, the American Falls can be viewed from walkways along Prospect Point Park, which also features the Prospect Point Observation Tower and a boat dock for the Maid of the Mist. Goat Island offers more views of the falls and is accessible by foot and automobile traffic by bridge above the American Falls. From Goat Island, the Cave of the Winds is accessible by elevator and leads hikers to a point beneath Bridal Veil.