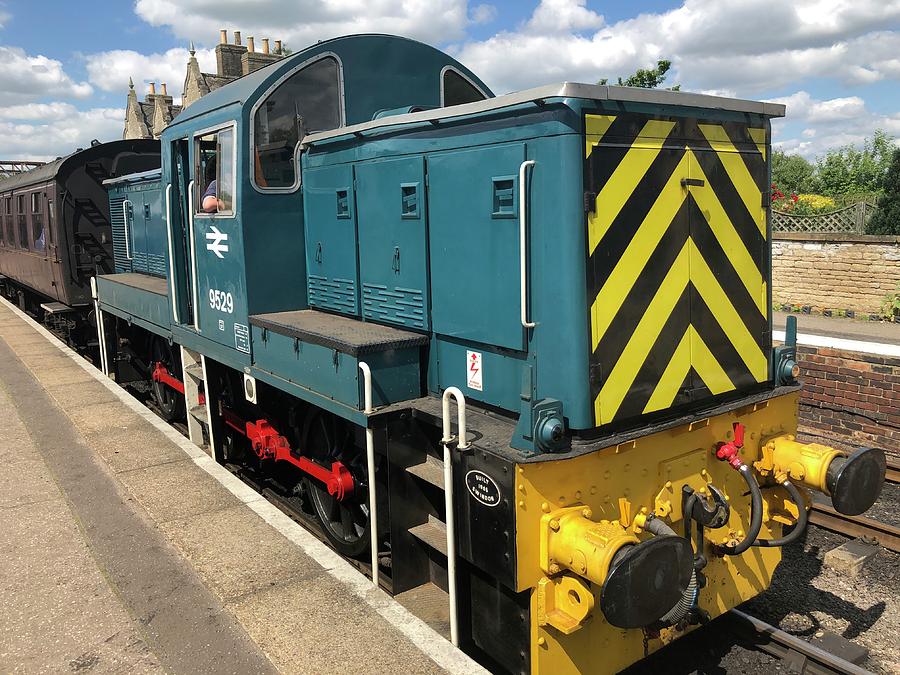 D9529, the twenty-first of the class of fifty six Type 1 0-6-0 diesel hydraulic (subsequently Class 14) locos, was completed at Swindon Works on 11th November 1964 and initially allocated to Cardiff (Canton) depot in South Wales. In January 1967, it was transferred to Hull (Dairycoates) with other members of the class for work in the North East Region and withdrawn from there in April 1968.

Purchased by Stewart & Lloyds Minerals Ltd. (which became part of the British Steel Corporation from 29th March 1970), the loco arrived, in company with D9523, now also based on the NVR), at Glendon Quarries near Kettering on 16th December 1968 where it became '24' (Plant No. 8311/24) and was used to haul wagons loaded with ironstone from the quarries to the exchange sidings on the St Pancreas - Kettering - Corby - Manton Junction -Nottingham line where BR hauled the trains to the iron and steel works at Corby.

On 12th January 1970, the loco travelled along the Midland main line to Gretton Brook loco depot for work on the Corby Ironstone Quarries system, where it was eventually renumbered '45' in the Minerals' loco fleet. In the course of time, it became the designated loco on the North Bank crusher sidings where all incoming ironstone was received by Corby Steelworks and, as such, the loco would often work around the clock on a three-shift system.

With the decline in steel production nationally and the subsequent closure of Corby's ironstone quarries in 1980, '45' was transferred to the Corby Tubeworks for short-lived general shunting and transfer duties.

On 16th March 1981, the loco (along with '61' - ex D9529) left Corby Works in a BR freight train bound for preservation on the North Yorkshire Moors Railway. With the influx of larger diesels on the Moors' line, D9520 was again surplus to requirements and was resold, moving south to Rutland Railway Museum, Cottesmore by road, returning to the East Midlands' ironstone field on 21st February 1984.

In March 1998, the loco was transferred on loan to Nottingham Transport Heritage Centre at Ruddington. It was no stranger to the Great Central main line - the loco had previously been a guest at GCR Loughborough's Diesel Gala in October 1985 to celebrate the Twenty-First Anniversary of the class, working with the GCR's then resident Class 14's D9516, D9523 and D9529 (as 14 029) - the latter had also subsequently 'moved on' from the NYMR and, of course the trio eventually transferred to the NVR in 1989.

On 20th April 2004, D9520 arrived at Wansford for completion of restoration and is now permanently based on the Nene Valley Railway as part of the Iron & Steel Traction Group, being 'reunited' with existing resident D9516 and D9523 and with D9529 (14 029) and ex NCB D9504 which are now on industrial contract hire and from time to time visit the NVR for maintenance.

D9520's detailed restoration programme covered an external and internal repaint (which shows the loco's original BR two tone green livery as D9520 and its Corby Quarries identity of '45'), together with mechanical overhaul and re-wiring. To enable D9520/Corby Quarries 45 to operate air braked trains (as built, the class of loco was vacuum braked only) an air braking system has been installed.